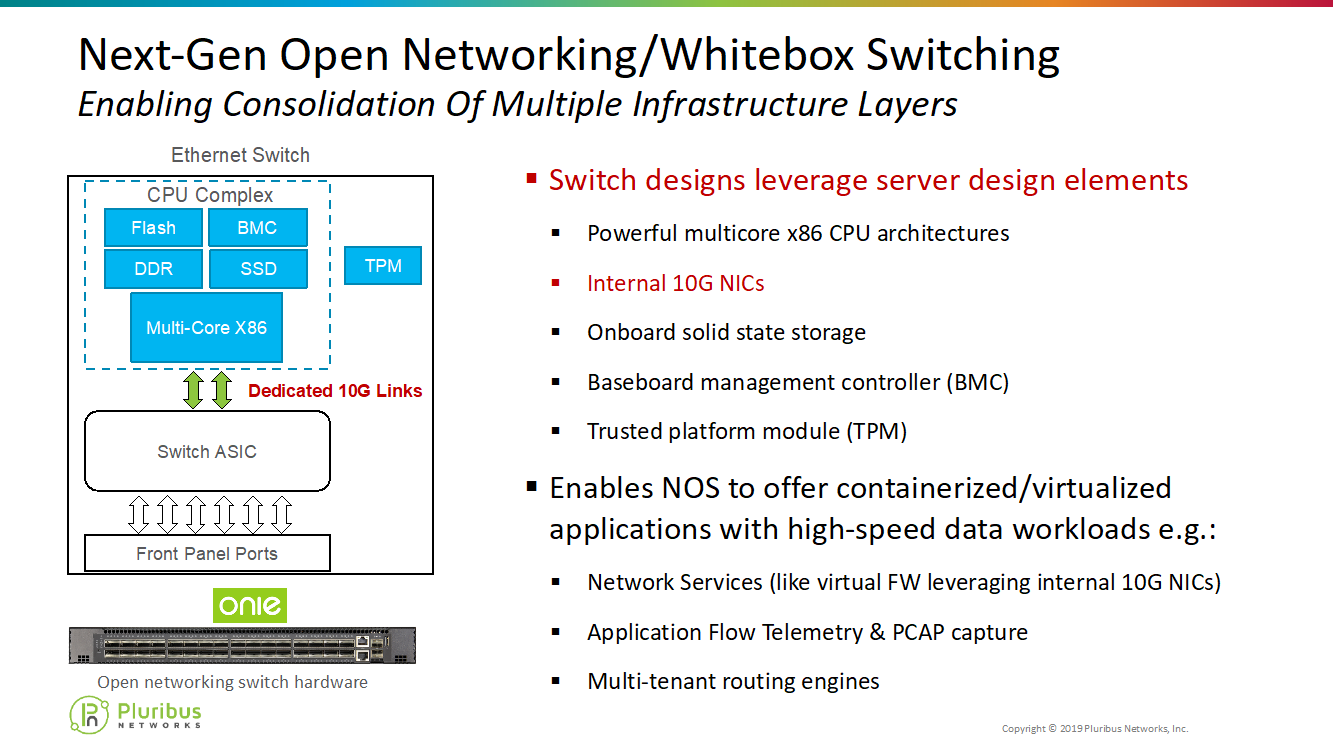 In my first blog in this five-part series, “Why Every Size IT Team Should Strive to Implement a Software-Defined Data Center (SDDC),” I talked about the fact that, while many workloads are moving to hyperscale public clouds, many will continue to run either in data centers with end-user owned infrastructure (on-prem or in colos) or in hosted private clouds. I also reviewed the business benefits of transforming to a Software-Defined Data Center and, in particular, focused on the challenges of providing a software-defined underlay and virtual overlay networking infrastructure, which has been the Achilles heel for IT teams in terms of achieving SDDCs.

Given the clear benefits of a Software-Defined Data Center transformation, is there an affordable and simple approach to get there? Is there an “Easy Button” that makes it feasible for even small and medium data center operators? We believe the answer is clearly yes.

To understand how, I will look at three sets of questions:

Question 1: Should I deploy open networking or go with a vertically integrated vendor when it comes time to upgrade, expand, migrate, or consolidate my data center and to support SDDC? How much risk is there in open networking, and what is the support model?

Question 2: Do I want my leaf-and-spine physical network to be deployed as a software-defined network (SDN) fabric, or am I comfortable with box-by-box configuration, operations, and troubleshooting? Is the cost and complexity of deploying SDN worth the effort? What are the various approaches?

Question 3: Do I want to create a virtualized network overlay fabric that creates a mesh of virtual tunnels between all endpoints (servers, storage, and other devices) and offers the ability to establish new network topologies and services in seconds? Is the cost and complexity of deploying a virtual network worth the effort? What are the various approaches?

These questions can be asked in any order, and often can and should all be asked and investigated in parallel. In this blog, I will focus on the first set of questions, about open networking, and then address SDN and network virtualization in an upcoming blog.

Over the last decade, some customers have been reluctant to take a risk on open networking because of its perceived immaturity and concerns with service and support in a model where software comes from one company and hardware from another. This is juxtaposed against the tremendous benefits that have been achieved from disaggregating software from hardware, including driving capital costs down by up to 50% and, more importantly, speeding innovation through an open-source community approach. Pluribus leverages Free Range Routing (FRR), which is an open-source codebase that sits under the auspices of the Linux Foundation and which gives us the base code for our Netvisor ONE Network Operating System (NOS). Because we leverage this core set of code from FRR, we are able to apply our software engineering resources to quickly innovate around the edges, focusing on key use cases for our customers and our unique approach to SDN and network virtualization, and contribute code back upstream for others to leverage.

There is no doubt that disaggregation itself speeds innovation and, unlike with vertically integrated vendors where hardware and software are highly intertwined, there is no hardware dependency that increases complexity and slows down feature velocity. Pluribus and other open software-only solutions can innovate quickly in a DevOps model and issue frequent software releases with new capabilities, while the hardware is also innovated in parallel from the likes of chip vendors such as Broadcom and system-level hardware solutions from Edgecore, Dell EMC and Celestica.

Open networking has been widely deployed by the hyperscalers and now is moving into the mainstream as IT teams become more comfortable with technology performance and quality, as well as support, from open networking vendors. 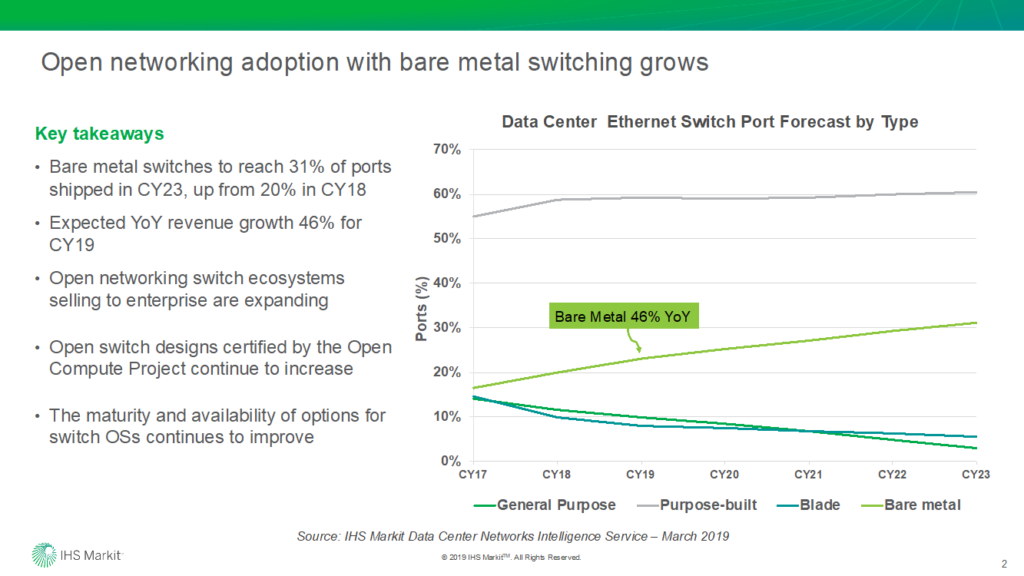 For example, AT&T has completely committed to white box technology and open-source path across multiple places in the network publicly. Many other institutions, from cloud service providers to K-12 school districts and local governments to enterprises, have deployed open networking with great success.

Pluribus is deployed in over 240 customers today, including deployments in over 80 virtualized (NFVi) 4G/5G mobile cores of Tier 1 service providers, where our software is carrying the traffic of hundreds of millions of mobile data subscribers. These sorts of mission-critical, large-scale deployments have allowed the software and hardware technology to mature and be hardened.

This large number of deployments has led to important feedback going to the open networking hardware vendors and resulted in rapid innovation as well as increased performance, not only in terms of data plane but also control plane processing power, memory, and architectural innovations. For example, 32x 100 GbE white box switches can now be sourced with Intel Xeon 12 core processors, 8/16/32G of RAM and 32G or larger SSDs, providing a powerful server-like platform that complements high-performance Broadcom network processing units (NPUs) like the Trident 3. The system-level architecture of these platforms has also matured, with two parallel 10G network interfaces between the Intel CPU and the Broadcom ASIC providing high-speed links to support significant control and management plane traffic. This has resulted in not only wire-rate performance in the data plane but the ability to run significant loads and traffic in the control plane, such as tens of virtual routers with high performance, making these switches suitable in the most demanding single- or multi-tenant network environments. 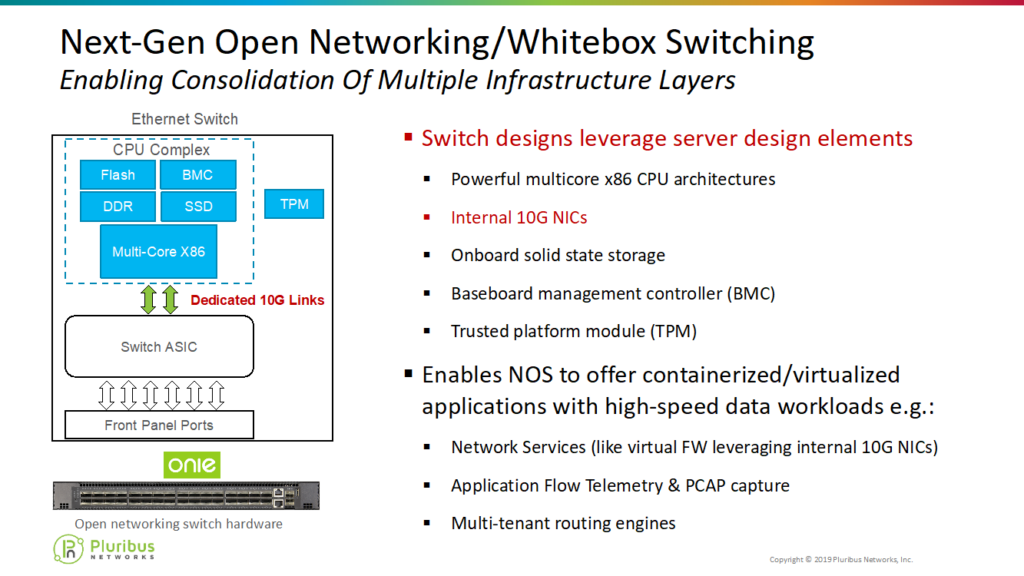 In spite of all of our talk of network virtualization, we will always need the physical underlay for connectivity. Our view at Pluribus is that if this latent server-like processing power is being deployed anyway, it should not go to waste. With clever software, one can leverage these platforms to run applications like SDN, network virtualization, virtual network functions (VNFs), network analytics, and more. I will talk more about this novel approach in my next blog.

Customers have become more comfortable with support from open networking software and hardware vendors. The support model does depend on the vendor partnership structure, but these have been set up, exercised, and polished over the last decade. For example, in the case of Pluribus’ partnership with Dell EMC, which has an extremely large global sales and support infrastructure, Dell EMC will take first- and second-level support, with Pluribus providing third-level technical software support. In the case of Edgecore or Celestica, Pluribus takes first- and second-line support and brings in the hardware vendors if needed. Pluribus has a follow-the-sun model, with 24×7 support out of our offices in Santa Clara, California, and Bangalore, India.

Any solution can be used to build a greenfield leaf-and-spine data center network once basic proof-of-concept lab testing is complete. However, in many instances, IT teams will want to insert a few leaf switches at the top of one or two racks into a brownfield data center to get a feel for open networking performance, stability, and usability. In such a case, the Data Center network might have a pair of existing spine switches from a traditional vertically integrated vendor like Cisco, Arista, or Juniper.  Most open network operating systems, including Pluribus’ Netvisor ONE OS, are designed to use standards-based Layer 2 and Layer 3 protocols and can easily insert into such a scenario. The only exception is when open networking solutions use a centralized SDN controller running on multiple servers to hold network state and program the switches with the OpenFlow protocol. In this case, the spine switches must be replaced with white box spines running the same OpenFlow-based OS that is running on the leaves, effectively limiting this type of solution to greenfield-only deployments.

Another approach that effectively requires greenfield environments is hardware-bound SDN implementations like Cisco ACI. ACI requires specific switches with specific hardware, typically requiring a rip-and-replace of existing infrastructure to deploy. The hardware dependency adds a layer of complexity and fragility that can hamstring and overwhelm IT teams trying to deploy SDN.

Open networking provides tremendous innovation and has been operating in mission-critical networks around the globe for a number of years – the code has been stressed and hardened in real-world deployments at scale. For example, the traffic from hundreds of millions of mobile subscribers is running through the Pluribus Netvisor ONE OS and Adaptive Cloud Fabric today where we are deployed in over 60 virtualized 4G and 5G mobile cores and over 240 customer environments. In addition to being hardened, the cost-to-performance ratio and feature velocity of the hardware and software available from open networking solutions is compelling. There has never been a better time to take a hard look at this technology in pursuit of lowering your CapEx, benefiting from modern automation, breaking free of vendor lock-in, and enjoying an increasing rate of innovation.

You can find more information on Pluribus Netvisor ONE and our open networking switch partners Dell EMC and Edgecore here. Stay tuned for my next blog on the topics of SDN and network virtualization.

Webinar replay: If you would like more detail on how Pluribus helps put SDDC and private cloud within reach for every IT team, then watch the replay of our webinar “Realizing the SDDC: Simple, Affordable SDN and Network Virtualization for Any Size Data Center.” In this webinar, I am joined by Drew Schulke, VP Product Management, Dell EMC and Alessandro Barbieri, VP Product Management, Pluribus Networks.  You can see the replay here.