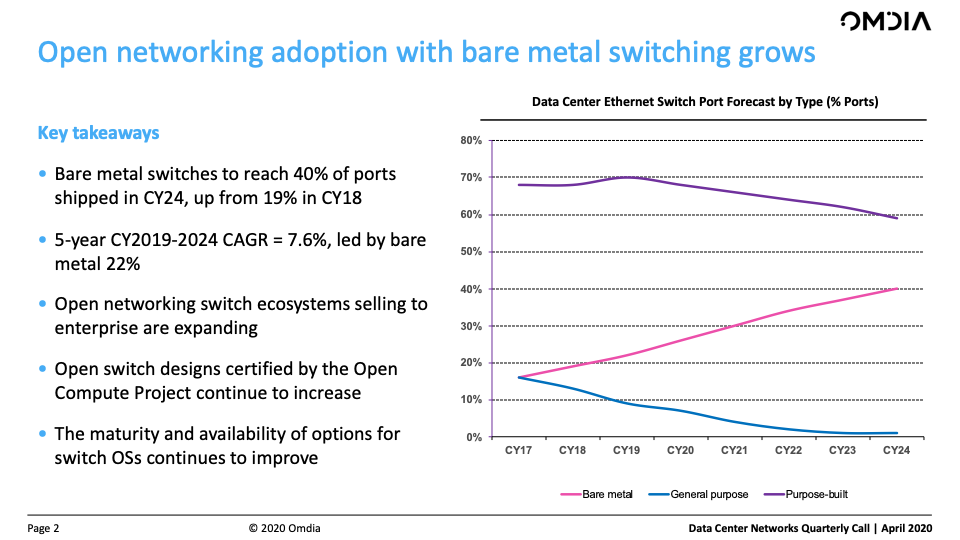 I wrote about the acquisition of Big Switch Networks by Arista Networks in a blog about one month ago. For the second time this year, there is news of an acquisition that impacts open networking and the broader SDN industry. Nvidia, who recently closed their Mellanox acquisition, announced this week that it’s acquiring Cumulus Networks (cheers to Timothy Prickett Morgan at The Next Platform for the scoop), “…and marrying it with Mellanox in its newly formed networking business unit.” While there will be time to digest the technical implications of this deal at a later date, at this point we wanted to examine the take-aways from a market perspective.

Taken together, the acquisitions of Cumulus and Big Switch are signals from the industry that the disruption predicted around software defined and open networking a decade ago is well underway. According to the analyst firm Omdia, bare metal switches will be the biggest growth drivers in the data center switch market through 2024. (Source: Data Center Networks & Automation Intelligence Service)

The ability of disaggregated, open networking solutions to provide innovation, automation and tremendous cost savings while performing at scale in massive, mission critical networks has been proven. Pluribus, for example, is deployed in over 300 customers today, including more than 80 mobile network operators where we serve as the network fabric for their 4G/5G virtualized mobile cores carrying the traffic from hundreds of millions of connected devices.

When the market for software-defined and open networking began to coalesce circa 2010, the companies seen as most capable of creating a viable, scalable open networking ecosystem were Cumulus, Big Switch and Pluribus Networks. Over the last decade, these three companies have focused their energies on driving open networking at scale, albeit with slightly different architectural focuses.

Big Switch designed a controller-based SDN fabric approach using OpenFlow with a goal of simplifying operations but the solution required three expensive SDN controllers at every location and all leaf and spine switches needed to be configured with OpenFlow, hampering interoperability with other vendors. Cumulus, on the other hand, focused on a single-box Linux-based OS, which could easily interoperate with other vendors’ switches.

However, because Cumulus did not provide any SDN fabric capabilities, network operators using the Cumulus solution needed to configure and manage the network box-by-box. As a result, Cumulus focused on selling into savvy DevOps teams that had the skills to use Linux-based tools like Ansible to automate the network – effectively DIY automation.

Pluribus has taken a third, more modular approach. Our Linux-based OS, Netvisor ONE, supports standard protocols and key features like BGP Unnumbered, broad Ansible toolkits and a rich REST API for programmability, providing a good single-box network OS solution for the DevOps community. Unlike Cumulus, though, Pluribus did not stop there. For the much larger community of network operators looking to reduce operations costs via a fully automated SDN fabric for single site or multi-site data centers, including highly distributed edge data centers, Pluribus offers the Adaptive Cloud Fabric (ACF).

The ACF is embedded into Netvisor ONE, running directly on the switches in the network, and simply needs to be activated with a license key to enable the fabric. ACF uses a unique controllerless SDN architecture to provide full automation to unify multiple data centers without the need for three controllers at every site. It can easily interoperate with any 3rd party spine, and has integrated network segmentation for security and granular per-flow visibility without requiring taps, probes and packet brokers. With Pluribus, you effectively get the best of both worlds, with a robust interoperable open network OS and a scalable, automated SDN fabric, providing maximum choice of how to deploy your network.

That three-horse open networking race has now narrowed down to one. With Big Switch and Cumulus being acquired by vertically-integrated system providers, Pluribus is in prime position to remain independent and to scale into a disruptive force that continues to deliver on the promise of both open networking and SDN. Our focus will remain, as always, on our customers and partners as we provide them with the flexibility, responsiveness, and agility that they have come to expect from our organization. Together, we will keep the spotlight fixed squarely on innovation that simplifies networking and puts the benefits of open networking and SDN within reach of a broad range of service providers and enterprises far beyond the early adopters in the hyperscale segment and the DIY DevOps community.