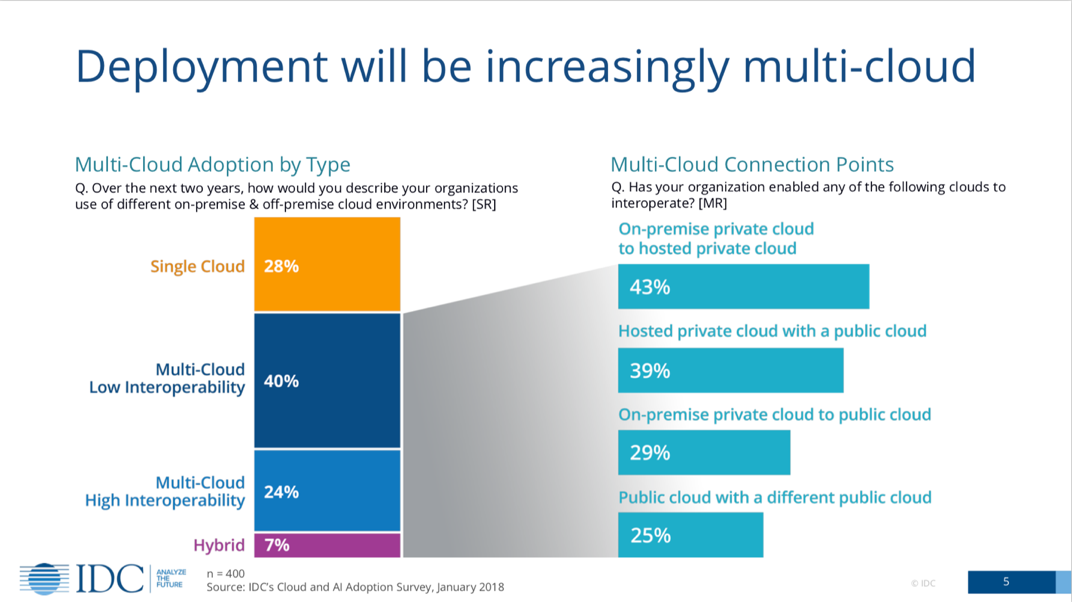 Pluribus Networks deploys our open networking and next-generation software-defined networking (SDN) solutions into many different cloud environments. Our Netvisor ONE network operating system and Adaptive Cloud Fabric software help simplify operations, improve performance, lower costs, and speed agility in cloud deployments. But understanding the nuances of these various “clouds” can be complex – there are many acronyms and terms, and sometimes we can lose our footing. This blog attempts to set the record straight on cloud definitions like multi-cloud vs. hybrid cloud and public cloud vs. private cloud and more – while also touching on the adoption status of each of these cloud frameworks.

Learn the differences between public cloud vs. private cloud.

This is any data center outfitted with the right software to allow multi-tenant delivery of on-demand services such as infrastructure as a service (IaaS), platform as a service (PaaS), software as a service (SaaS) or the more recent function as a service (FaaS), and in which these services are delivered from shared infrastructure. These resources can be spun up in minutes over any network connection, including the internet, and paid for with a credit card if so desired. Public cloud has been a hugely successful business, is growing rapidly and is dominated by the hyperscaler market share leaders Amazon AWS, Microsoft Azure, Alibaba, and Google Cloud. At the other end of the spectrum is a less well known but rapidly growing segment – regional cloud service providers (CSPs) and specialty cloud service providers.

Many of the CSPs have evolved from managed service providers (MSPs), climbing the stack to deliver IaaS, PaaS, FaaS and SaaS offerings on a regional basis. For example, Pluribus customer Econocom Italia, with its Naboo Cloud offering, is a regional CSP in Italy. One of the key drivers to put workloads on Naboo Cloud is that some customers wish to keep their data and applications securely inside the borders of Italy. An example of a specialty CSP is Packet, which provides high-performance bare-metal IaaS that can be spun up or down in minutes. Along with Pluribus, Packet is a founding member of the Kinetic Edge Alliance.

This is a cloud service for a single tenant on dedicated hardware. Also, the dedicated infrastructure cannot be spun up or down in under an hour (in other words, if it can be spun up or down in less than one hour, it would be considered a public cloud-like Packet, mentioned above). It has the same attributes as a public cloud service – self-service, consumption-based pricing, automation, and elasticity.

However, this cloud service is for a single customer and is completely isolated – nothing is shared. This service can be deployed on-premises (on-prem) on enterprise-owned gear, in a colocation facility on enterprise-owned gear or hosted by a CSP. The service can be managed by the enterprise itself or managed and delivered by a third-party MSP/CSP. Enterprises lean toward this model for privacy, control, security, and cost savings – many workloads are actually more cost-effective to run on a private cloud. Private cloud is also widely adopted and, in many cases, we are starting to see repatriation activities, where, primarily for cost reasons, enterprises are refactoring applications to move workloads back to private cloud. In fact, in IDC’s Cloud and AI Adoption Survey, January 2018, they found that over 80% of enterprises had some repatriation activities to move workloads from public cloud back to a private cloud or on-prem data centers.

Learn. the differences between hybrid cloud vs. multi-cloud.

In talking to customers, the common definition of “hybrid cloud” is that workloads would start on-prem or in a private cloud and burst into the public cloud when demand dictated. Interestingly, I had a conversation with analyst Thomas Bittman at the Gartner IT Infrastructure, Operations & Cloud Strategies Conference 2019. His perspective? This vision of hybrid cloud has not really been realized – or to be more cautious, there are very few examples of workloads bursting into the public cloud or moving back and forth between public and on-prem or private clouds. Even those workloads in magical containers are not moving back and forth between cloud environments because each cloud environment has a unique set of application programming interfaces, and those platforms are each evolving at different rates.

Of course, application components can be distributed into different clouds and data shared between clouds, so if we morph our definition of hybrid cloud to be about distributed applications and shared data but with the actual executables living in only one cloud environment, then that makes sense. But I believe that is very different from the common definition behind “hybrid cloud”, where executables are moving between cloud platforms. And that is why the term multi-cloud was developed, in order to describe the reality of today’s deployments where there are multiple workloads and multiple clouds (AWS, Azure, private, etc.), but each workload is typically on only one cloud platform.

Of course, many players are making moves to try and realize hybrid cloud, but in my opinion and the opinions of many analysts, it has not been meaningfully realized yet. It will be interesting to watch the battle between Microsoft with their on-prem Microsoft Azure Stack offering, AWS with their on-prem Outposts offering and other similar approaches. Will enterprises deploy both Azure Stack and AWS Outposts to host different workloads and end up with two sets of hardware from each provider? I’d say it’s unlikely, so perhaps the only enterprises that might deploy Outpost, for example, are enterprises that are “all in” on AWS.

Multi-cloud is a term that was born because many folks realized that hybrid cloud was not really happening as envisioned – that each cloud has a set of attributes, be they features, cost, control, security, etc., that makes a particular cloud platform right for a particular application or workload. So, an enterprise or service provider might have one workload running in AWS, another in Google Cloud, another in a regional CSP (like Econocom Italia Naboo Cloud), another in an on-prem private cloud and another in an on-prem traditional data center. Multi-cloud is highly relevant and growing, as shown in the IDC chart above. Multi-cloud best describes today’s cloud reality.

This is an emerging cloud architecture where mini and micro data centers are starting to be deployed closer to users and things to reduce latency, lower bandwidth costs, and increase autonomy and privacy. The Internet of Things (IoT) is a significant driver of this phenomenon. Many other terms are used to refer to “distributed cloud“, such as edge compute, edge cloud, and fog computing. Early signs point to a rapidly increasing distribution of data center and cloud infrastructure, as can be seen in this IDC survey, which included telco, MSP, CSP, and other service providers.

This distribution will move to compute into environments such as central offices and base station aggregation locations from the likes of Vapor.io. In the distributed cloud scenario, it is likely that workloads, be they VM- or container-based, will actually need to be moved from location to location to meet end-user latency requirements as well as spikes in service demand. In this case, a common network environment that stretches from the centralized on-prem data center or cloud out to the furthest edge compute location will be critical. Distributed cloud infrastructure is well suited to use the same software-defined networking construct for seamless automation and monitoring across all the various “edges” of the distributed cloud, from the central data center out to a cell tower or a factory floor. This, for example, is the approach Pluribus Networks takes with our distributed cloud solution. You can read more about distributed cloud in this blog, which talks about Pluribus’ announcement at Mobile World Congress, and our recent deployment at the Kinetic Edge in Chicago in this blog.

Let me know your thoughts on my definitions!